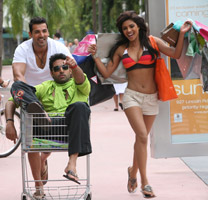 As far as now it is known to everyone that ‘Dostana’ is about to release on 14th November, 2008. However, there is buzz that Karan Johar was not happy with the climax of the movie and so he asked director Tarun Mansukhani to re-shoot it.

It is also known that, as once again moving to Miami does not seem to be possible so a set was created in ‘Film City’ to re-shoot the climax of the film.
However, Tarun denies this and sticks to the fact that everything is fine and the movie will be released on the confirmed date.
Well, how good the climax is going to be can be known only after watching the film but before the climax, its the overall movie that is awaited.
Isn’t it guys?
Featured Video