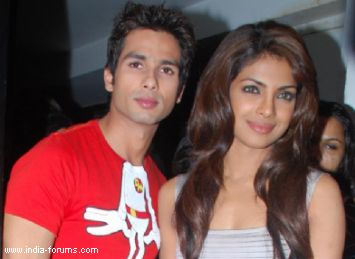 After making Aamir Khan do the 'shayari' in "Fanaa", director Kunal Kohli asked Shahid Kapoor to do some poetry in "Teri Meri Kahaani" and the actor says he was very nervous about it.

"It's (shayari) something I really enjoyed in 'Fanaa' as well. I was nervous to be doing it because somebody like Mr. Aamir Khan had done it," the 30-year-old told reporters here Thursday while unveiling the first look of "Teri Meri Kahani".

"I told Kunal (Kohli) also that I hope I don't make a fool of myself as it was done really well in your earlier film. But he was very kind and said we'll find a way of doing it well," he added.

"Teri Meri Kahaani" stars Priyanka Chopra opposite Shahid and is set in three eras - 1910, 1960 and 2012. The film, being promoted with the tagline - 'Thrice Upon A Love Story', will hit theatres June 22.

Shahid plays Javed Quadri, one of the three characters in "Teri Meri Kahaani". The character is set in pre-independence Lahore.

"I got a chance to say this (shayari) as Javed's character and I think Javed is really cool. Of all the three characters, Javed is the worst behaved. I always say this to Kunal that the character of Javed is the worst person to be existing at a time, that is in 1910, when everyone was supposed to be very well behaved," he said.

The role was both fun and difficult for the actor.

"I loved playing this character because by using shayari he does anything he wants. So I found that character very exciting and also the most difficult because I think I am playing a Muslim character for the first time in my career," said Shahid.

"Secondly, it was very heroic, massy kind of character. He is not afraid of anyone, does what he wants and teases any girl he wishes," he added.