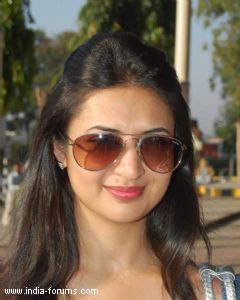 TV actress Divyanka Tripathy is happy to be back on telly with the forthcoming daily soap 'Ye Hai Mohabbatein'. She plays a Tamilian in it and says she fell in love with the character immediately.

"It's a huge pleasure that Ekta Kapoor chose me for the serial," Divyanka told reporters on Thursday at the launch of the show. She added that she accepts a show only when she "falls in love with the character".

"When I came to know about this show, heard the narration and of course, Balaji (and its association with it), I had to step into this venture," said the actress, who became popular with the daily soap "Banoo Main Teri Dulhann".

'Ye Hai Mohabbatein', based on the novel 'Custody' by Manju Kapoor, traces the journey of a married businessman and a Tamilian girl Ishita, who becomes very fond of the former's child.

Although, in between, Divyanka tried her hand at comedy but she really missed daily soaps.

Divyanka said she will speak Tamil in 'Ye Hai Mohabbatein', but without any lingo.

"I learn't some specific words on the set. But as the story will progress. I will speak Tamil, but there will be no lingo," she said.

'Ye Hai Mohabbatein' will go on air on December 3 on Star Plus. It also features Karan Patel.

prats233 6 years ago Karan Patel...ur the life of the show...Yeh Hai Mohabbatein rocks...

rishani77 6 years ago Really liked the promos & the concept, waiting 4 the show!
Wishing all the best 4 Divyanka & the entire team!!!

Angelicprinces 6 years ago Why did Ekta replace Cezanne Khan??I waited so long for this show & now this is what I get!