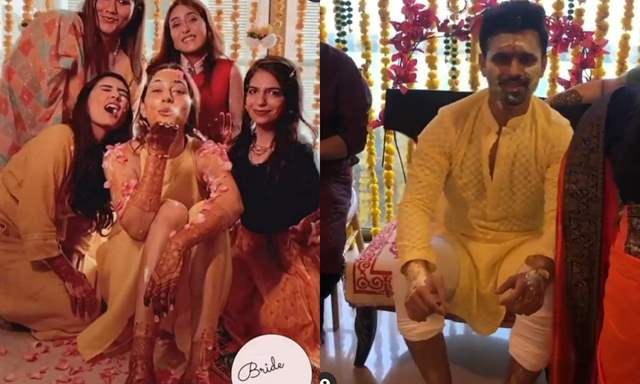 Actress Disha Parmar and singer Rahul Vaidya are all set to tie the knot on July 16 and the pre-wedding festivities have begun on Wednesday. The couple's photos from the Mehendi ceremony were all over social media and fans couldn't help but go gushing over the soon to be married couple.

And today, photos and videos from their Haldi ceremony have been doing the rounds as friends and family of the duo share them on social media. While Disha looked adorable in a pastel yellow dress, Rahul opted for a bright yellow kurta and white pyjama. Both of them are sure having a fun time as they dance their way into the day as they get closer to the wedding.

Here are some photos and videos from the Haldi ceremony of the duo:

Rahul and Disha's love story is nothing short of a fairytale. While the two have known each other for a really long time, it was during his stint in Bigg Boss 14 that the singer decided to propose to his ladylove. Interestingly, Disha said yes to him during her appearance on the show itself and the two have been goals, ever since.

On the work front, Rahul recently returned from Khatron Ke Khiladi - Darr v/s Dare while Disha revealed earlier that she is waiting for a nice project to come in.

Until then, we wish the two all the best!