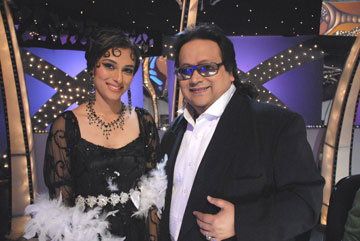 Friday 21st September is going to be a very special and a memorable day for all the contestants in SaReGaMaPa. They will be releasing the second SaReGaMaPa Challenge-2007 album – “Manzil”, which has songs sung by all the contestants who were there in the final twelve. The theme on Friday is Disco Special. And every contestant gives out mind-blowing performances. Amanat gives a brilliant performance on the song “Ek Haseena Thhi”. Aneek seizes the early 80’s era by singing the song “I am a disco dancer”.

Friday is also the elimination day, and now as the show is nearing its end, and with some really good contestants left, eliminations become a sad affair. After getting low ranking in the votes chart for past few weeks, Raja finally again manages to get the top position. He is followed by Aneek. In the bottom are Amanat and Sumedha. Who among them gets eliminated? To know this, do not forget to watch SaReGaMaPa on Friday, 21st September, 10 PM only on Zee TV. 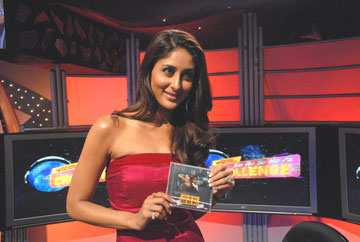 Saturday SaReGaMaPa saw Kareena Kapoor as the celebrity guest turning it into a very high Voltage show. The whole episode is filled with fun and fans went berserk over this gorgeous heroine. SaReGaMaPa sets is again made the platform to release another Music Album, this time being Imtiaz Ali’s musical “Jab we Met”. Aditya Narayan and the remaining four contestants welcome Kareena to the stage with the song “Mauja Mauja” also from the same film. Kareena too makes sure to distribute the album CD’s among the contestants and the audience. 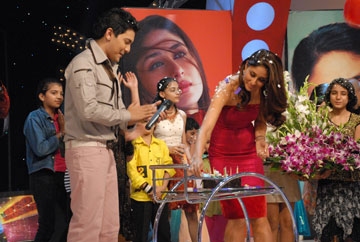 But there was a surprise awaiting Kareena and also the audience. Zee TV celebrated her Birthday on the sets and all the Participants gifted her with something orienting from their own region. There was also a lot of fun at the Role Play by all the contestants, wherein they interacted with Kareena, in their respective mother tongue reflecting their culture, while the actress enacts her character in the film. Saturday’s episode has encapsulated all the popular songs that public loved of Karishma, Kareena and their parents.

With just four contestants left, the viewers now get the treat to enjoy two songs from each of the contestants. Aneek Dhar was the show stealer when he sang the songs “Lets Do Balle Balle” from Fida and “Jaane Jaan Dhoondta phir raha hoon” from “Jawani Deewani” and makes sure to score 30 upon 30 in the guru graph, with Kareena unable to stop herself from joining him on the stage. Raja rocks the stage with “Dham Dham Dhadam Dhadiya re” from OMKARA and “Ye Jawani Hai Deewani” from Jawani diwaani.

Both Friday and Saturday is going to be musical and fun filled episodes. Also added to it, will be the eliminations. So, do not miss out all the fun and tune into Zee TV on 21st & 22nd September at 10 PM.

14 years ago on friday, it was poonam and sumi in the bottom 2...not amanat
ooohh thanks for the article...seems a really good epi :D

14 years ago wow, looking foward to tomorrows epi.
i love 'JaaneJaan' from JawaniDiwani.

really looking foward to it.

14 years ago Looks like an exciting episode with Kareena, can't wait to watch it this weekend.

+ 3
14 years ago thanks.
looking forward to the episode.

14 years ago I will go with black. I have feelings Amanat will go back to Pakistan.We will miss him.

+ 3
14 years ago Seems like a treat to all the men.. Sure the TRP is gonna raise for both the episodes ;)

Dont worry girls, we will have our turns too!!

+ 2
14 years ago definitely the girl in the black is prettier! she's sumi the barbie after all! ;)