Caught under BollyCurry's scanner this week is a director who's gained widespread recognition for directing some of the most successful romantic musicals in Bollywood. Just like his previous directorial ventures, Mohit Suri's latest film, Ek Villain, has gone onto receive widespread adulation from the audiences and critics alike; and was one of the highest openers of this year. 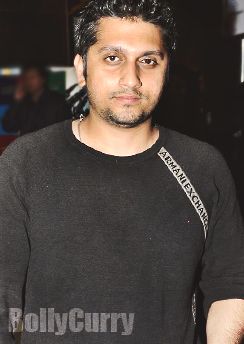 Coming from a film family, it wasn't difficult for Suri to get his first break in the industry. At the young age of 20, Suri debuted as an assistant director with the film Kasoor [2001], which was produced by his uncle's production house, Vishesh Films. Following this, he went on to assist his uncle Vikram Bhatt in the direction of many Vishesh Films' ventures, including Awaara Paagal Deewana [2002] and Footpath [2003]. His debut directorial venture was with the film Zeher [2004], for which he also wrote the story. The movie starred Emraan Hashmi, Shamita Shetty, and Udita Goswami; and performed moderately well, despite receiving largely positive reviews from the critics.
Suri went on to direct a number of critically and commercially acclaimed movies, all for Vishesh Films, including Kalyug [2005], Woh Lamhe [2006], Raaz - The Mystery Continues [2009] and the musical blockbuster Aashiqui 2 [2013]. Aashiqui 2, starring Aditya Roy Kapur and Shraddha Kapoor, was one of the biggest hits of the year, and went on to become a rage among the youth of the nation. The songs of the film were extremely well liked, and the soundtrack became one of the most acclaimed albums of the year. Suri's latest directorial venture, Balaji Films' Ek Villain [2014], was his first directorial venture out of the Bhatt camp, and the success of this film only serves to prove his mettle.

Suri is known to be very close to the Bhatts, and has mostly directed movies for their production house, barring Ek Villain [2014]. His next directorial venture is Humari Adhuri Kahaani, due for release in 2015, and is co-produced by Vishesh Film and Fox Star Studios. The movie stars Emraan Hashmi, Vidya Balan Kapur and Rajkummar Rao, and is said to be based on the life of filmmaker Mahesh Bhatt.
Did You Know?
We, at BollyCurry, would like to take this opportunity to congratulate Mohit Suri on his latest successful directorial venture, and hope that his forthcoming movies are as successful as his previous ventures.
Author: Ritchelle C.
Editor/s: Komal P. and Gunia M.
Graphics: Shikha A. and Komal P.
Do you have a suggestion or comment for BollyCurry? Drop us a PM at BC_Dropbox today.
7 Likes