What better thing to do in the blistering heat than go watch a movie in a cooled theatre? Summer is one of the most awaited times of the year, not just because it's vacation time, but also due to the numerous films that get released with our favorite stars. Just like how a ship is incomplete without its captain, similarly a movie is incomplete without its director. The director is the one-man army who breathes life into a script. This month, BollyCurry focuses its floodlight onto none other than David Dhawan! 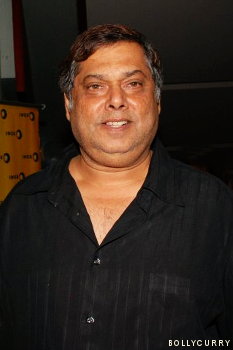 Born on 16th August 1955 in Agartala, Dhawan was brought up in Kanpur where his father worked as a bank manager. He graduated high school from Christ Church College, and married Karuna Chopra, with whom he has two sons - Rohit Dhawan and Varun Dhawan.
Dhawan started his film career with editing before he shifted his focus to directing. He is most widely known for his comedic films. Dhawan, unlike many others, jumped right into the field of directing. His directorial debut was Taaqatwar (1989) with Govinda. He went on to make numerous films with Govinda as his leading actor, most of which were comedies. He directed films such as Raja Babu (1994), Coolie No.1 (1995), Hero No.1 (1997), Jodi No.1 (2001), Partner (2007) and Chashme Buddoor (2013). Partner is perhaps his biggest commercial success, earning 300 million rupees in just its opening week. His latest venture was Main Tera Hero (2014) with his son Varun Dhawan as the lead and also starring Nargis Fakhri and Ileana D'Cruz. Dhawan has been nominated for numerous prestigious awards such as the Filmfare Award for Best Director and IIFA Award for Best Director.
His upcoming films include Tom And Jerry (2016) and Partner 2 (2016) with Salman Khan, Govinda and Katrina Kaif.
DID YOU KNOW?
BollyCurry wishes Dhawan all the best for his future films. We are eagerly awaiting more news regarding the Salman Khan and Katrina Kaif starrer Partner 2. We hope he continues to entertain the audiences for a long time to come!
Author: Nisha M.
Editors: Aradhna K. and Gunia K.
Graphics: Marsh P.

ShaNak_RagNa 5 years ago You are an Amazing director David sir...wishing you good luck for future projects:D