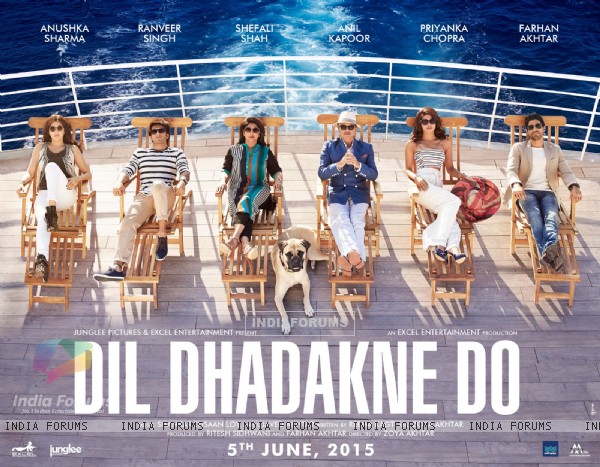 Zoya Akhtar has surely put up some good work with Dil Dhadkane Do . Trailers and songs did make it to the blockbuster list and promotions were surely creating a buzz among the audience.
Now after the special screening of the movie we have the tinsel town going head over heels about this comedy flick.
Last night the DDD team had arranged for a special screening and B-town was seen in full presence. Just after the show ended twitter was flooded with compliments and best wishes for the troupe.
Some attractive tweets that our eyes couldn't give a miss were:
Riteish Deshmukh was gaga over the Mehra's @Riteishd: Laughed & Cried with the Mehras of #DilDhadakneDo outstandingly entertaining. Congrats- #zoya @FarOutAkhtar @ritesh_sid sssupreme writing. You da Man sir, @AnilKapoor - no one could have played Mr Mehra better than you - No Mr Mehra n there is No #DilDhadakneDo - take a bow.
Arjun Kapoor along with praising the team was flattered over his Chachu's performance:@arjunk26: I just saw an epic film...funny simple layered warm and relatable...can't tag all those handles in this multi-starer... #DilDhadakneDo. And I will be bias and say this @AnilKapoor What an actor !!! Ek dum jhakaas !!! Best male performance of the year by leaps and bounds I say.
Veteran star Rishi Kapoor tweeted: @chintskap: Zoya am so proud!Such a difficult film handled so deftly. A team effort-actors,dp,sound,set,production,Pluto loved it.
Legendary actor Amitabh Bachchan posted @SrBachchan: Silences in a film allow the audience to enter the mind of the actor .. rare ... DDD does that in abundance ! Well done Zoya !!
Though Karan Johar could'nt make it to the screening he expressed his eager await:@karanjohar: My mother just called to say that #DilDhadakneDo is the best film she has seen in years!!!!! You go ZOYA!!!!!! Can't wait to see it!!!
Until now DDD has surely engraved its name. But, how far it will reach the hearts of the audience can be decided only after its release on June 5, 2015.
For more pictures click:
http://www.india-forums.com/event/10516-special-screening-of-dil-dhadakne-do.htm