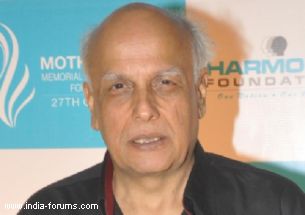 Filmmaker Mahesh Bhatt, whose daughter Alia Bhatt has crooned a song in her second film "Highway," says he had no idea she could sing as well.

"It was a surprise for me! I had no idea that she also sings so well. When she become versatile and goddess Saraswati blessed her, we have no idea," the 65-year-old said here at an event here.

Alia has crooned "Sooha saha" for the movie, which released Feb 21.

The 20-year-old is getting a good response for her performance in "Highway", a road film directed by Imtiaz Ali.

Alia recently said that she would love to be in a film made by her father, but Mahesh Bhatt says there are no plans for this as yet.

"No, we don't think that way. We make films and it's not like we have decided not to work together. She has her own journey, if there is something, then we will do it otherwise it's not necessary," he said.