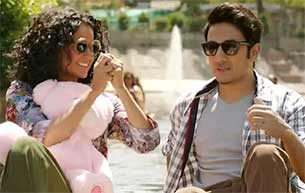 She is playing a wild character in "Revolver Rani" and true to her role Kangana Ranaut got aggressive while locking lips with her co-star Vir Das for a scene, said a source.

Apparently, the actress kissed him so wildly that his lips began to bleed.

"In one scene, Kangana is arrested and is on her way to jail. She requests for some time to attend to an urgent matter and drags Vir Das to a room and kisses him so wildly that his lips start bleeding! No actress till date has portrayed such a 'manizing character'," a source said in a statement.

Set for an April 25 release, the film will present Kangana as an extremely dominating and aggressive woman, in contrast to her role in her latest hit "Queen".