Jodi No. 2 of Nach Baliye, Reshmi Ghosh and Amit Gupta gave a power packed performance this week on the theme ‘Love and its different shades’. The song they chose was ‘Kuch Bedardi’… 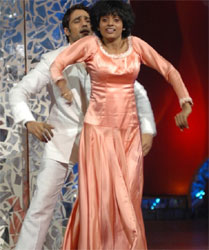 Featured Video
“We took the theme of Deewangi, which is one of the shades of love and at the end we were satisfied with our performances as all liked it,” says Reshmi.

Elaborating on the story line of their act, she explains, “It's the story of a girl who has recently lost her hubby in an accident. She has also sustained injuries in the same accident. Now she is sitting in bridal avatar with her hair little bit burnt and bruises on her hand. She is in trauma, but suddenly she sees her hubby coming towards her. The dance is between reality and imagination. At the end, she realizes that she has lost him for ever”.

“This was just her imagination that her hubby is alive, but soon she meets the truth and her world is shattered. This is what we have tried and portrayed through our dance”, she adds.

Talking about the judges’ comment, she quips “Farah Khan and Karisma Kapoor were really amazed with our performances. Farahji said that the posture, lip movements, everything was so very proper”,

“Arjun also liked it, but he felt that the element of dance was missing. I really don't know why he felt so, but as an individual, he gave us the opinion and we are happy for it. We will see to it that next time all three judges as well as janta like our performance even more”, she concludes.

So let's see what other jodis have to offer in this week’s episode.

13 years ago interesting concept for a dance... will have to see it!

+ 2
13 years ago hmmm, the first time their performance is being appreciated!

+ 2
13 years ago both well done
looking forward seeing it

+ 5
13 years ago Thanks! I think this theme is so rebundant!

+ 2
13 years ago Reshmi is cool but i dont liek Amit i only like her and i only watch their performance because of her but my favorites is Shaleen & Daljeet, Mauli and mazer....