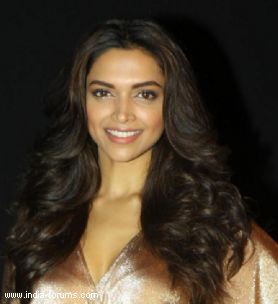 Bollywood's blockbuster actress Deepika Padukone was Wednesday signed on to endorse Axis Bank. She will front the private sector bank's new campaign 'Badhne ke kai naam hai', and says she's happy to be associated with a service so important to an individual's progress.

"A bank plays a very important role in the progress of so many individuals and I'm proud to be a part of the Axis Bank team," Deepika said in a statement.

She is happy that being a woman, she has been chosen to represent the brand as she sees "no reason why any industry should be dominated by either gender in today's day and age".

"Like I mentioned earlier, a bank plays such an important role in the progress of so many individuals, and that's what has excited me the most about this association," she added.

Deepika, who grew from being a badminton player to a model and then actress, says she believes in the brand's philosophy - "Badhti Ka Naam Zindagi".

"I've always believed that if you stop growing, you stop being. Moreover, progress is a very individual thing. What it means to you might be very different from what it means to me. But yet for both of us, it's the most vital part of our lives. In a way it's a common thread that binds us," she said.

This is the first association of the bank with a celebrity, and the idea behind zeroing in on Deepika is because "her journey of progress represents the new India which is young, hardworking, in-tune and aware of the world around them", said Rajiv Anand, president - Retail Banking, Axis Bank.

"She is contemporary yet there is an innate Indian-ness about her. We believe these qualities will fit the brand perfectly," Anand added.

The campaign, designed by Lowe Lintas lies in the space that progress has many dimensions and talks about the holistic nature of progress and highlights Axis Bank's journey as a customer-centric bank.