View Profile
The recently held 2012 Colors Screen Awards have been the talk of the town with fabulous star performances, 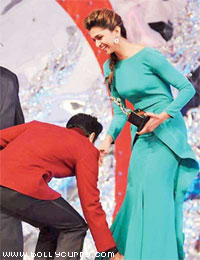 numerous surprises and some interesting impromptu moments!
One such moment came when tinsel town's controversy king Ranbir Kapoor came up to accept the Best Actor award for his outstanding performance in Rockstar. Interestingly, ex-flame Deepika Padukone was presenting the award alongside ace director-cum-producer Subash Ghai.
What made this moment one of the night's best was what Ranbir did upon reaching the stage. He bowed to touch Ghai's feet to seek his blessing and then immediately turned to Deepika's feet! The actress and audiences alike were quite surprised. However, Deepika was said to have laughed it off in good humor!
We, at BollyCurry, are glad that Ranbir and Deepika seem to be back on friendly terms, especially since the two will be seen in the same frame for Yeh Jawani Hai Deewani later this year!
Publicity stunt or some jovial teasing among friends? You be the judge!!!