It would take long before Aamir Khan's nephew Imran Khan, who is set to make his debut with 'Jaane Tu...Ya Jaane Na', comes out of his uncle's cocoon and faces the media alone - confidently.

The stage was set for Imran to make a grand entry at an event held here Wednesday, but it was a shy and nervo 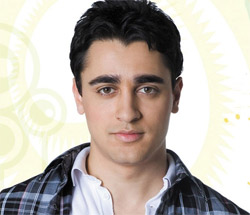 Featured Video
us boy who emerged from the backstage.

Dressed in a checked shirt paired with jeans, he walked in taking small steps and stood still on the stage alone and kept quiet.

'He is very fresh,' an official from Zee Cinema, who organised the event, said.

Imran's nervousness came clearly through his stammering voice and his frequent raising of eyebrows. He also avoided all possibilities of speaking to the media and be questioned about his film.

All he said was that his favourite film is 'Amar, Akbar, Anthony'.

At most events till now, Imran has been accompanied by Aamir and probably hence, his low confidence levels weren't so far highlighted.