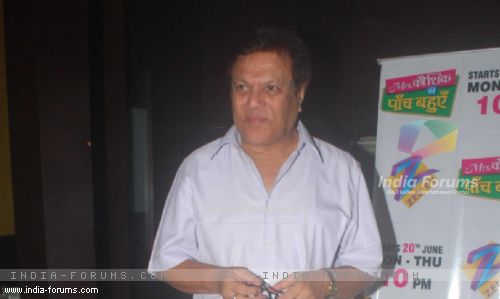 Actor Rajeev Verma has witnessed the changes that have transformed the television industry and feels that even today Doordarshan scores over satellite channels by focusing on variety.

In the late 1980s, Rajeev was part of DD's highly popular shows like "Chunauti" and "Mujrim Hazir" -- the latter also starred legendary actress Nutan in a pivotal role. When private channels forayed into the country, he became part of soaps like "Heena".

Praising Doordarshan's offerings, Rajeev said: "Every show has a different script and storyline. But Doordarshan shows are not just meant to entertain people, they try to give some social message through which people can learn something.

"Most of the shows on other privately-owned channels just try to entertain and hardly give any message," Rajeev told in an interview.

In recent times, he has become more active on the small screen, but is mostly seen as a father or a grandfather in shows like "Choti Bahu" and "Mrs Kaushik Ki Paanch Bahuein" and "Aur Pyaar Ho Gaya".

"When I started my career with Doordarshan's 'Chunauti', at that time serials were different from the ones being made now. It was a very sensitive time. The subjects that were used in the scripts were all well-selected and researched.

"When new channels started, they had a different concept. Most of them just had a basic aim to hike the TRPs of their shows with all worthless scripts," he said.

Currently, Rajiv is essaying an IAS officer in the weekend show "Janmon Ka Bandhan" and said: "I am playing Surendra Kapoor. He is emotional, but at the same time he is very strict. His wife is dead, so the responsibility of their children is on him."

This is not the first time that he is playing a strict father -- he was seen as a disciplinarian dad in super-hit movie "Maine Pyar Kiya". Equally active in filmdom, he has been part of movies like "Hum Saath Saath Hain", "Koi...Mil Gaya" and "Chalte Chalte".

However, despite so many years of experience, he has to some times struggle for roles that are pivotal to the scripts.

"To become an actor, you need professional training. It's not a permanent job. You have to prove yourself every time you are asked to. After working in so many shows, sometimes even I have to struggle for better roles. There is no security and surety in this field," he said.

The renowned actor will next be seen in the satirical comedy "Wah Taj", which stars Shreyas Talpade in the lead role. He will be playing a lawyer in the film. A release date is yet to be announced.

pink16680 9 years ago I really dont like katrina, she does not know how to act , only beauty does not work. for SRK we need some good actress, like Kajon,Rani, Preity Zinta, If they need new actress Dipika would have been best choice

+ 10
9 years ago veer zaara rocked so this one will to :Dlove u srk

+ 4
9 years ago This movie will make wonders! Well at least I hope it does :)

Thanks for this BollyCurry =D xx

9 years ago SRK waiting to see your next romantic film with Katrina and hoping that it will be a super duper hit movie :)))))))))))

+ 4
9 years ago I JUST HOPE Its not remake of VZ with the two of them :| i like Anushka but not Kat..shall be waiting for SRK movie though :$

+ 4
9 years ago hmm, nice but didnt anushka and katrina have a fight over a Makeup man? and now they are gunna be working together?

9 years ago Srk :-) yipee, but kat still cant act :-/ god knows how her films r hit all d time. Lets c if Yc direction can improve sum of her acting skill or not. But i wud ne day prefer a kajol than a kat type actor.

+ 2
9 years ago Super-excited...SRK's the King of romance and rules billions of hearts..I absolutely love him :) :)