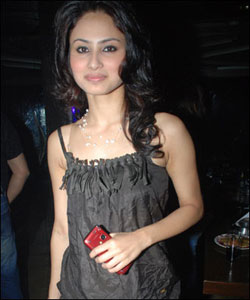 For Mouni Roy, dance is her passion and the actress is quite happy these days as she is busy taking part in a Musical Event and is traveling all over the country.

Says the actress, "I am not doing television shows for at least the next two months, as I am utilizing this time for dancing. Recently we had our Musical events at Washington, New York and many other places".

Mouni who is a trained Kathak dancer is also well-versed in contemporary Salsa and Jazz. The girl whose dancing prowess came to the fore in Star One's Battle of the Sexes, Zara Nachke Dikha was reported to be part of NDTV Imagine's upcoming show on the blockbuster film of yester years, Seeta Aur Geeta. But the actress quips, "I was just short listed for the role, but had never signed on the dotted line. A leading newspaper did put up a story that I have been finalized for the role without even taking my quotes. This is where all confusion happened".

As for now, it is dance that keeps the elegant Mouni going, and we wish her all the success in her events!!

13 years ago Yep... She is amazing dancer and always will be. Also I love her acting silks....

+ 2
13 years ago Love you Mouni, you are amazing girl..love your dancing!!

+ 3
13 years ago she is a grt dancer. saroj khan said this too in her prog. she dances very gracefully.

+ 3
13 years ago oh i miss seeing her, !
good shes fufilling her dream of dancing

13 years ago Thanks...Shw is one of the best dancer in tellywood

13 years ago I think she''s one of the best dancer in telewood.