When one is looking for a representation of the phrase  "opposites attract", a Bollywood couple that comes to mind is the charming duo of Kajol Devgn and Ajay Devgn! This month, BollyCurry throws the spotlight on this charming couple who recently crossed their 14th wedding anniversary! 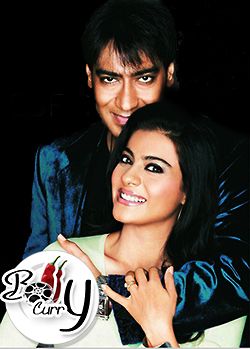 Both the talented actors hail from families with a Bollywood background. The Bengali-Marathi descent Kajol had both her parents involved in the B-Town industry with mother, Tanuja, an actress and father, Shomu Mukherjee, a film director and producer. As for Ajay, he is the son of  director and action choreographer Veeru Devgn. Kajol debuted in 1992 with the film, Bekhudi, Devgn did so in 1985 with Pyaari Behna.

It wasn't until the shooting of the film, Hulchul in 1995 that the two met and fell in love with each other. They remained "best friends" for nearly four years before officially tying the knot on February 24th, 1999. The wedding was a simple, private affair in Maharashtrian style with only close family and friends present. Shortly after the auspicious event, the newly-weds escaped on a two month long honeymoon in Europe!

Like any other married couple, Kajol and Ajay were forced to face some ups and downs in their marriage as well. In 2001, as the couple prepared to welcome their first born, Kajol suffered a miscarriage in her sixth month. Two years later, all was well and their daughter, Nysa, entered the world on April 20th, 2003, much to daddy Ajay's joy. Son Yug was born seven years later and ever since then, acting has taken the back seat for Kajol and motherhood has become the priority.

Despite many rumours and controversies, the beautiful couple is going strong and happy with two charming children. The vivacious Kajol and introverted Ajay definitely complement and complete each other! We wish this ying-yang duo the very best for their future, in both their professional and personal lives!