As we eagerly look forward to the upcoming IPL (Indian Premiere League) playoffs, we'd like to bring your attention to one cricket player who's been in the limelight for reasons other than his impeccable batting skills. Yes, we're referring to the extremely talented and good looking captain of the Indian Test Team and Royal Challengers Bangalore, Virat Kohli. Quite obviously, he's no Bollywood celebrity, but like most of us are aware, Kohli is currently in a steady relationship with the immensely skilled and gorgeous actress Anushka Sharma. Join us, as we take a trip down memory lane and reminisce on their love story.
Kohli and Sharma first met at the shoot of an 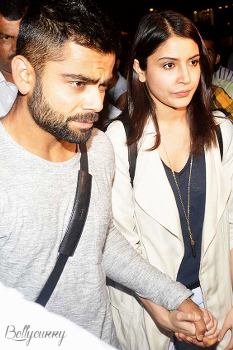 advertisement for a shampoo brand that the two of them endorse together. They shared warm vibes on the day of the shoot and stayed in touch long after. Spotted together in various parties and social events, gossip mills were abuzz with stories of their apparent relationship, but the two kept mum about the same. However, Sharma's visit to New Zealand in early February 2014 when Kohli was there for a tournament, and his subsequent visit to Sri Lanka where Sharma was shooting for Bombay Velvet (2015) with Ranbir Kapoor and Karan Johar, left everyone's tongues wagging about their increased proximity.
After months of refusing to comment about their relationship, Kohli surprised all and sundry by blowing a kiss to Sharma (who was watching the game from the stands) after reaching a milestone in a match, which put all gossip mills to a rest. They then went on record to admit to the media that they were in fact seeing each other and there was no need for the media to speculate and interfere in their lives.
Kohli and Sharma's relationship has always been the talk of the town for various reasons. Only recently, after India's and Kohli's dismal performance at the ICC Semi-Finals in Australia, the duo were severely bashed by cricket enthusiasts on social media, and some even went on to burn effigies of Sharma and Kohli. A very disturbing moment in their lives, the two came out strong with their heads held up high, and paid absolutely no attention to their detractors. The two made headlines when they came out hand-in-hand from the airport, and headed home in the same vehicle.
Unlike many celebrity couples who prefer to keep mum about their very obvious relationship status, Kohli and Sharma are one of the few couples who are actually vocal about their relationship and their love for one another. In fact, after the release of Sharma's last film, NH10 (2015), Kohli went on to tweet, "Just watched #NH10 and i am blown away. What a brilliant film and specially an outstanding performance by my love @AnushkaSharma. SO PROUD:)". The two have gone on record to talk about how much they mean to one another, and how they've brought stability and security into each other's lives.
At the moment, Sharma is busy promoting her forthcoming release Excel Entertainment's Dil Dhadakne Do, where Sharma's a part of an ensemble starcast including the likes of Ranveer Singh, Priyanka Chopra, and Anil Kapoor. Kohli, on the other hand, is busy preparing for the Bangladesh tour.
From this BollyCurry writer and all others, here's wishing the gorgeous Anushka Sharma and the charming Virat Kohli all the very best for their upcoming ventures.
Author: Ritchelle C.
Editor/s: Mohini N. and Gunia K.
Graphics: Marsh P.
Have a comment or suggestion for BollyCurry? Drop us a PM at BC_Dropbox today!

5 years ago I hate Virat Kohli because of his arrogance but I am glad to see that his love for Anushka is real and strong and he is supporting her. Keep going, AnuVir/ VirNushka.