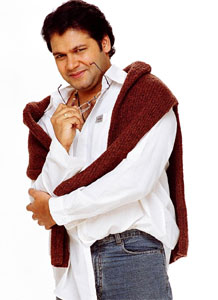 Featured Video
Tell us something about your show Hello Kaun Pehchan Kaun on Star One?
It’s a damn good show and very different from other laughter reality shows. Here you can see people donning a new get-up especially of their favorite celebs. Another factor that adds is that there are more common people in the show and for a change it’s good to see them in disguise.

What are your criteria in judging the show?
Chunky and I basically judge the contestants on their styling and voice. We see to it whether the person is perfect in mimicking their favorite celebs or not. In other words, we check the mannerism of the participants.

What kind of equation you share with your co-judge Chunky Pandey?
The best thing about him is that we can laugh at ourselves. I can crack jokes on myself and laugh, and same is the case with Chunky. I feel if you can laugh at yourself, then you have the ability to make other people laugh at your gags. I’m having a gala time with Chunky in the show, and we are enjoying sitting on the other side of the stage.

Whose act you liked the most in the show?
I love the act of Akshaye Khanna. The person who mimicked him was fabulous. He did not have great disguise to put on, but he made faces and it was really good. Another performance I liked was of a Doctor guy who mimicked Aamir Khan and Hrithik Roshan. His voice was so similar to the actors that once I felt that Hrithik was talking to me.

What are your views on comedy as a genre?
We need more of comedy in our lives, especially after witnessing what has been going on these days. This genre keeps your mood better. The shows like saas-bahu makes you cry and watching these news channels I must say is harmful to health. So we need to have more and more comedy.

After acting and judging comedy shows, what’s your next step?
I want to have a maddest channel in the world. There is lots of humor in this world and I wish I could edit them and show it in my channel (Laughs).