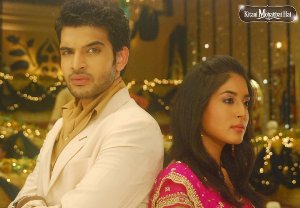 Balaji Telefilms and Imagine TV's Kitani Mohabbat Hai Season 2 will come up with a new twist in the tale, starting tonight!! Soon there would be an entry of a kid who will create a chaos in the lives of Arjun (Karan Kundra) and Arohi ( Kritika Kamra).

Our source states, "The kid's entry will create an intrigue element, and all will be left wondering as to whose kid it is. However, with the kid's entry, Arjun and Arohi will realize that they do have something towards each other that pulls them together. Even though they try their best to hate each other, there is something beyond everything that gets them closer".

The kid who will essay the role is played by a new face Sami; his screen name will be Raj. Initially the role was to be played by the kid seen in the movie Udaan, but things did not work out. The kid will enter the show tonight.

We contacted Kritika Kamra and she confirmed the news of a child entering the show.