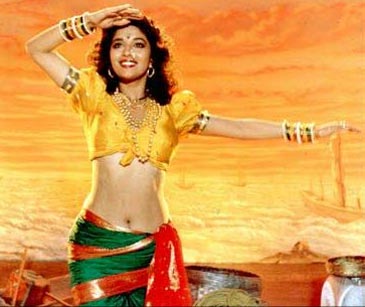 Actress Chitrangda Singh, who has been part of off-beat cinema, has done her first item number for Shirish Kunder's "Joker" and says it is inspired by Madhuri Dixit's number from "Sailaab". But she feels you can't do a Madhuri, you can only try.

"When Farah Khan offered me the song I asked her what's the song all about? What was the concept? What kind of look will I have? She told me it will be similar to Madhuri's look in 'Sailaab'. She said we will try and get the same look like Madhuri," Chitrangda told reporters during a press conference.

"Hair style, clothes are somewhat similar to 'Sailaab'. I had a great time dancing. Unfortunately, I didn't get much time to rehearse. But whatever time I got, I used to keep rehearsing. We did as much as we could... it is beautifully choreographed by Farah and it is a very very good song," she said.

Talking about Sudhir Mishra's "Kaam" with Arjun Rampal, she said: "We finished shooting for 'Kaam'. It is a different love story and is set against the backdrop of sexual exploitation. The movie is set in an ad agency. It is about what happens when you are working together. There is a case of sexual harassment."

R. Madhavan opens up about the release of Nishabdham; says ...
54 minutes ago

“Prabhas’ passion for cinema only drives him,” says Radhe ...
55 minutes ago