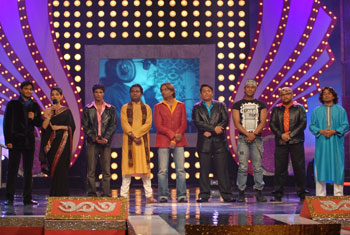 It's all happening on K for Kishore. More songs, more laughter and more Challengers too! The competition just took a surprise turn when the eight contestants of K for Kishore were confronted with 14 Challengers from all walks of life who made it through a tough selection process—IBN7, Tata Indicom & Radio Mirchi.

These new Challengers (selected from over 70,000 aspirants) are no less devout fans of Kishore Kumar than any of the six Maharathis already on the show. The Jhumroo and Bangroo teams welcome the new entrants with a medley of Kishore Kumar songs displaying their own singing prowess in the bargain. Undeterred by the stiff competition the newcomers rally with great performances while taking on each of the Maharathis! 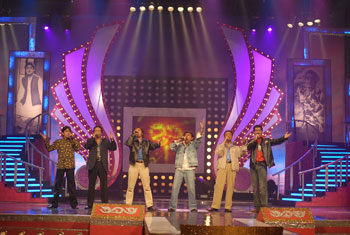 Nakhrewaali… Jitendra, an auto rickshaw driver from Gujarat, belts out Mera jeevan kora kaagaz… while Jimmy showcases his talent with Neele neele ambar pe… But it takes the confidence of a Sikandar from neighboring Pakistan who dares to challenge the uncrowned king of K for Kishore - Nayan Kumar Rathod. He hopes to be christened Sikandar Kumar by the end of the show!

This Challenger's Special of K for Kishore is not only about singing. Watch out for the challenges posed by the Maharathis to the newcomers that show the opponents talent. The duel begins on K for Kishore as it steps into a thrilling phase. The judges warn of a stiff competition ahead.

Do not miss the show this weekend with the fun spilling over to Saturday too. New faces, new voices, new excitement awaits viewers on K for Kishore.
The
real fun is about to unfold this Friday, February 15 at 9.00 p.m. only on Sony Entertainment Television.

but wasn't amit paul supposed to come too???

+ 5
14 years ago Its different let see where it takes