In the latest edition of Celebrity In The Spotlight, BollyCurry has chosen to shine the light on an actress who is well known to all the fans of Indian cinema. Not only is she a phenomenal actress, but she is also grace personified when she dances. We are, of course, talking about the one and only Madhuri Dixit Nene.

Born in 1967, Madhuri Dixit-Nene, as she has been known after marriage, hardly looks her 48 years of age. A leading 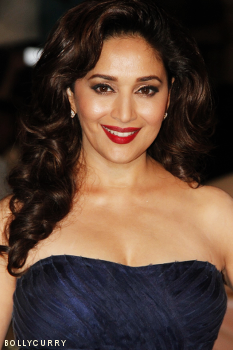 actress of Bollywood throughout the 80s, 90s and the early 2000s, Dixit is a critically acclaimed star, as well as a public favorite. It is hard to believe that she originally studied to be a microbiologist.

Dixit took a sabbatical from films starting in 2002 to shift her focus to her marital life and raise her children. After 5 long years, she finally made her comeback in 2007 with the dance-heavy Aaja Nachle, proving to the world that she was still light on her feet and a charismatic persona on the screen. She later starred in the 2014 dramas Dedh Ishqiya and Gulaab Gang.

Besides acting in films, Dixit has been a judge for four seasons of the dance reality show Jhalak Dikhhla Jaa. She has also participated in several stage shows, and engaged in philanthropic activities. In 2014, she was appointed the UNICEF Goodwill Ambassador in India.

Did You Know?
We, at BollyCurry, cannot wait to see more of the Madhuri magic on our screens, and we wish her all the best in all her projects, in and out of Bollywood.
Writer: Aradhna K.
Editor(s): Pooja B. and Gunia K.
Graphics: Marsh P.
Do you have a suggestion or comment for BollyCurry? Drop us a PM at BC_Dropbox today.