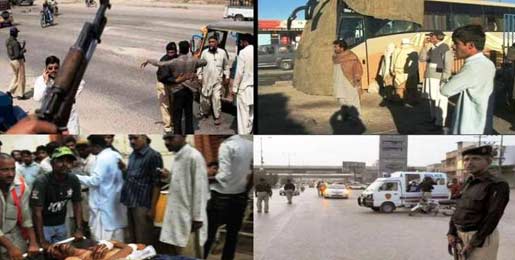 The incident took place near the city's Safoora Chowk area in the provincial capital of Sindh. At least 45 people were killed and 24 injured when the gunmen opened fire.

Ali, who ventured into tinsel town with the Bollywood satire film "Tere Bin Laden" in 2010, took to micro-blogging website Twitter on Wednesday to express his grief.

"Sad day. Very sad day. #killings," the "Mere Brother Ki Dulhan" actor, who had earlier brought together celebrities for the video of his single "Urein ge" to pay tribute to the victims of last year's Peshawar massacre.

Actress Taapsee Pannu, who co-starred with Ali in the movie "Chashme Baddoor(2013)" in 2013, wrote: "Karachi...let's thank god every morning that we wake up breathing. Future has never been more unpredictable".

"Shocked & disgusted at the killings of innocents in #Karachi #BusAttack. No religion supports murder of humanity. Unbelievably sad & angered!!," tweeted the "Mitwa" hitmaker.

Arjun also took to Twitter to write about the incident.

The 42-year-old actor tweeted: "A religious group bus is attacked in Pakistan. Prayers for the families of lost ones & all those injured. Don't know which God approves this".

South Indian actress Lakshmi Manchu wrote: "I will never understand how one can kill another for the sake of religion and caste. Breaks my heart beyond words. #Karachi rip".

5 years ago Omg! This was happened towards my university..;-(
May ALLAH help all the victims families..