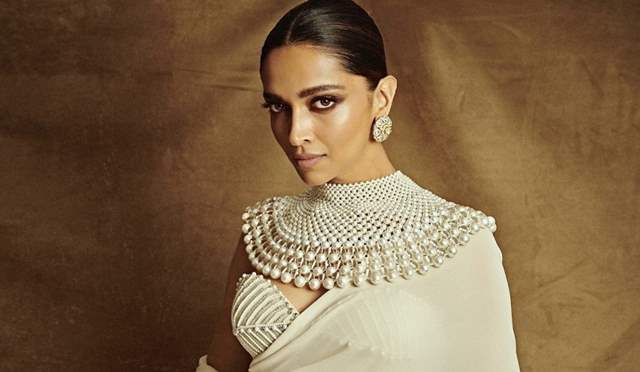 After a whirlwind of showcasing some breathtaking looks and honouring some great movies, the 75th Cannes Film Festival is finally coming to an end. To be noted, this year was much important and glorifying for India as our leading actress Deepika Padukone was a part of the jury member for the festival.

Not only that but throughout the festival, Deepika served us with some extraordinarily scintillating looks and we still can’t stop fawning over them.

For the closing ceremony of the festival the Tamasha actress took the ethereal Indian route and sported a magnificently designed saree with a very dramatic blouse. She sported a blouse embellished with white beads designed in the structure of leaves. Her neck was covered with a choker styled bib shaped pearl necklace which accentuated her look.

Her saree having layers of ruffles throughout appeared exquisite. Letting her ensemble do the talking, the Chennai Express actress opted for a nude matte make-up look and styled her hair into a sleek bun. She enhanced her face with silver stud earrings.

Deepika Padukone looked like a goddess in this pristine look and fan's couldn’t take their gaze away from her.

Since the beginning of the festival Deepika has been raising the bar after every other look of her’s and has been proving that she definitely is the conqueror of haute couture.

Talking about her work engagement, she will next appear on the big screens alongside Shah Rukh Khan and John Abraham in Pathaan. Apart from that she also has Fighter, Project-K and The Intern remake in her kitty.

+ 3
2 months ago When they go abroad they flaunt their brown skin but in India they have to be the fairest of all. What hypocrisy 😒

+ 2
2 months ago horrible makeup and lipstick.