With cinemas reopening and some of the biggest films all set to be rolling soon, we already have an interesting slate of buggies coming up right away.

While Sooryavanshi is up for release on Diwali, we have another mega release in the form of Bunty Aur Babli 2 coming up as well. After an interesting teaser a couple of days ago, the trailer was launched only recently.

The trailer starts with OG Bunty (Saif Ali Khan) and OG Babli (Rani Mukerji) now living a simple and average life away from their earlier crimes where Bunty has a ponch and is as ordinary as you can imagine while Babli, still talkative is a housewife.

But hell breaks loose when a cop (Pankaj Tripathi) captures them as 'Bunty' and 'Babli' have been in action again and conning one person after the other. But after knowing that it isn't the OG Bunty and Babli, they wonder who is it after all.

Enter the new gen Bunty (Siddhant Chaturvedi) and Babli (Sharvari), who are conning everyone and doing so with the legacy of Bunty and Babli's names.

The premise of the film definitely looks a lot of fun and with such an alluring starcast at the helm, it can only get better. What's amazing is the self-awareness where we know that actually it was Abhishek Bachchan who was Bunty and now Saif Ali Khan taken over - and this itself is used as a joke in a scene in the trailer.

We definitely cannot wait to jump on with Bunty and Babli 2's shenanigans. 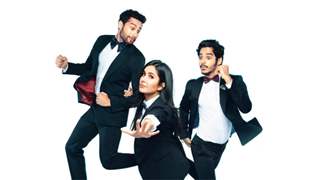 + 4
1 months ago The trailer looks fun. I think I am gonna watch but for Pankaj Tripathi 😂