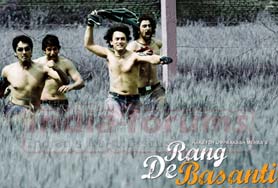 Bollywood films have a new trend these days – male bonding. Coupled with a screenplay brimming with gags and sexual innuendos, it definitely keeps the box office busy. From Hera Pheri through Kya Kool Hain Hum, to Lage Raho Munna Bhai, this flavour of the season has audiences pouring in, and producers laughing all the way to the bank.

Things were different not so long ago. As Inder Kumar recalls, with a smile, "We had male bonding even in the past, in movies like Sholay and Yarana." However a friend in need then was someone willing to sacrifice for the other, maybe even die. And favours doled out were never mentioned. Every hero was a martyr, a one-dimensional superman, who silently suffered for his buddy.

Unlike the heroes of today – bold, brash, unethical and exploitative, at least, when it comes to his pal. It is almost a new revolution in film content. Indu Merani believes that male bonding works only in comedies. "We all know that guys have a lot of fun, when they go out. Showing that fun on the silver screen will attract attention." However, Merani adds that she would not want to watch the same trend in all the movies.

Since most producers feel the need to cash in on this new aspect of content, they churn out nonsensical feature films, filled with nothing more than a series of stale gags and meaningless, forced bantering. However, most of them work miracles – remember what No Entry did to Boney Kapoor's business? 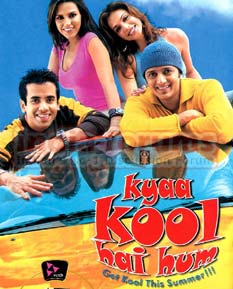 And the boys have a ball, too. Reitesh Deshmukh and Tusharr Kapoor became overnight sensations with Kya Kool Hain Hum, after they were written off as non-actors. Akshay Kumar suddenly became not-so-wooden after Hera Pheri, and he gets better with every boy flick.

Rakesh Roshan pooh-poohs the trend. "The most important thing in a movie is the content," he points out. "If the content is good, it will do well. It has nothing to do with the male bonding." He mentions Rang De Basanti and Iqbal as examples. Roshan's next movie, Krazzy-4, will have some male bonding as well.

Inder Kumar says, without any qualms, "Bollywood has always followed Hollywood, and we cannot rubbish this truth." He is referring, of course, to movies like American Pie and Snatch, wonderfully 'inspiring' to our aspiring directors, especially since the producers are willing to participate in the revolution.

We have always had hero-centric films in the industry, only now, we have the camaraderie between errant husbands and sex-starved bachelors lighting up the silver screen, and bringing a twitch on the lips of the most humourless man in the audience. Male bonding is here to stay.