View Profile
Bollywood is a place where nothing remains constant. Not friends, not enemies and definitely not lovers! Well yes, the saying goes like that, but what do our philosophers have to say about these two 'mourning' buddies? The 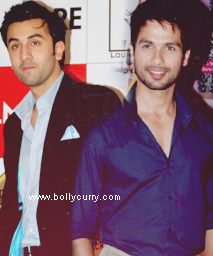 fans of chocolate boy Shahid Kapur and the Casanova Ranbir Kapoor can now rejoice, as a new found friendship strikes between the two.
If the rumor mill is to be believed, then these two B-town hunks have started bonding with each other and have become quite good friends! The two were seen partying at Anushka Sharma's house on Valentine's Day where the two started talking courtesy of Wake Up Sid director and good friend, Ayan Mukherji. It's a known fact that Imran Khan and Ranbir Kapoor, once upon a time very-close friends, have parted ways and are now just cordial buddies. Along with this, news of Priyanka Chopra and Shahid Kapoor's split has also been the talk of town lately. So now, who understands your pain better than the sufferer himself? Ever since the little bonding, SK and RK have become tinsel town's newest BFFs.
After IK and RK's friendship went a little overboard and then finally lofted down, can we look upon SK and RK to become 'friends forever'? Well let's leave it all up to Mr. Fate!