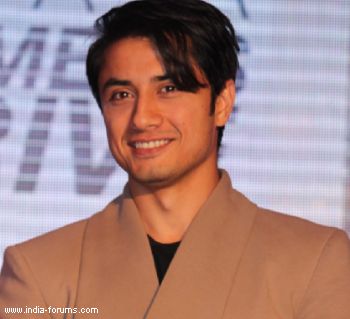 Pakistani actor-singer-composer Ali Zafar, who received the best new talent trophy at the 143rd Dadasaheb Phalke Academy Awards, says the support of his co-actors has made it easy for him to work in India.

"Katrina Kaif (with whom he worked in 'Mere Brother Ki Dulhan') is a good actress, a good friend and there are other friends also who supported me and cared for me. This love and support have made it very easy for me to work in India," the 31-year-old said at the awards ceremony Thursday.

Talking about the award, he said: "I really adore this award. It's really a big and prestigious honour for me. I feel I am too small for an award like this. So, I would like to thank the jury for thinking about me for such a prestigious award."

"I couldn't have had asked for more. I don't have words to explain my happiness and gratitude towards the academy," he added.

For him, Bollywood is a global village.

"I think Bollywood is the world's biggest industry. It has a big heart and even the Indian audiences have a big heart. If you see the industry, you'll find people from all over the world working because of its adaptable nature. It doesn't matter if you are from Hollywood or Lollywood, you should work here to experience all of it."

Praising the Indian film industry, Ali said that it has grown in leaps and bounds and added: "It has gone through many interesting phases and each and every era had its own magic."

Meanwhile, Ali, who had lost weight for David Dhawan's "Chashme Buddoor" remake, is now gaining weight for the "Vettai" remake.

"'Chashme Buddoor' is my next film. I am playing a young college student in it, so I thought of losing weight because college students are really thin. I also ensured that there are no muscles. So I lost a lot of weight. And now for my next film, I am again gaining weight," he said.

" 'Tere Bin Laden Part 3" is coming and when Abhishek Sharma narrated the story to me there was one character which I thought I'd enjoy more. It is a cameo but is very interesting. I myself told him to let me play that part and Abhishek was also excited about the idea. We are working upon it," he said.

Sara Ali Khan heads to Mumbai as she receives summon from ...
a minute ago

Bigg Boss 14: First look of the shopping mall, theatre and ...
10 minutes ago

exclusive
Exclusive Ashnoor Kaur on music video with Millind: It is something ...
31 minutes ago

Mohsin Khan gets injured on the sets of Yeh Rishta Kya ...
2 hours ago
View More
TOP