View Profile
The much hyped Indian International Film Academy (IIFA)awards to be held this month at Macau will see lot of bollywood biggies missing for some or the other reason.

Akshay Kumar has pulled out since he wants to go on family vacation. Akshay had been working overseas for a long duration and the IIFA ceremony is coinciding with son Aarav school holidays. Akshay wants to spend time with family now. 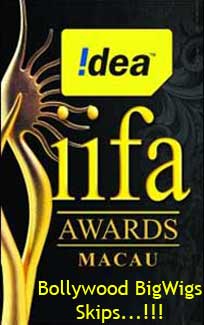 Featured Video
Kareena Kapoor has dropped as she will be watching T20 World Cup in England with beau Saif Ali Khan. Kareena's belly dance act at IIFA was highly anticipated  so the organisers were shocked when she backed out.  The reason is Saif Ali Khan's  home production "Love Aaj Kal" has a promotional tie up with the T20 World Cup in London.


Shahid Kapoor too will not be attending the upcoming  awards ceremony in Macau on June 13 due to an incomplete patchwork shoot for an untitled film by Ken Ghosh.

Another hunk Ranbir Kapoor too refused to dance live on stage. Apparently, Ranbir is unwilling to dance to the songs of other actors and feels he still does not have a well-stocked kitty of his own songs and is therefore not ready to show his dance moves on stage. Ranbir, reportedly, was offered a huge sum, close to Rs. 2 crore, to perform at next week's IIFA awards in Macau, but he turned it down.

The biggest setback is all Khans would be missing the awards. Shah Rukh Khan is currently shooting with Kajol in San Franciso for My Name is Khan, directed by Karan Johar. Farah Khan is busy choreographing a song on SRK-Kajol hence she would miss IIFA. Salman Khan has pulled out of performing at IIFA since he needs to finish the last minute shoot for Wanted and Veer and also he wants to focus on his show Dus Ka Dum.  Aamir Khan absence is in keeping with his usual distance from award functions hence wont be attending. Imran Khan gives personal reasons for his absence but its reported that he doesnt want a repeat of Filmfare awards where he shared the best debut award with Farhan Akhtar.

John Abraham has a fractured leg so he wont be able to attend and reportedly girl friend Bipasha too wont make it.

Preity Zinta needs rest after all the IPL travelling and alleged news of rift with beau Ness Wadia.  The Slumdog Millionaire fame Freida Pinto was asked to attend the IIFA by its organisers, but the young lady lady said a flat NO and the reason is unknown.