A rough appraisal of recent trends indicate the rise of action genre in our industry. The angry young men are becoming an increasing rave among audiences, and to cater to this growing hype, there is an increasing shift in the mainstream towards the said genre.

BollyCurry brings you a summary of some popular actors and their increasing current investment in the upcoming action flicks, and speculations about their future at BO. 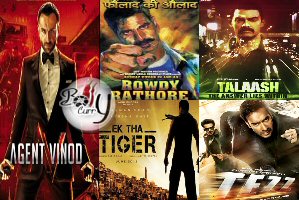 Let's begin with Chote Nawab and his still un-ready to wed ladylove Bebo. After bombing at bow office with the ambitiously cast and promoted social-political Aarakshan, Saif Ali Khan transitions to full on action with next in line home production, Agent Vinod, an alleged Mr. & Mrs. Smith inspirational, slated for a holiday release on 23rd March. Postponed for release more than once, this movie is especially anticipated by Saifeena fans, who are excited to see the real life duo back onscreen after Kurbaan. No less has been the buzz surrounding Kareena Kapoor's sensational mujranumber recorded as a last minute addition.

Next in list is action-jack Akshya Kumar; who true to his reputation shall mark a return to action, after his average stint in the comic genre which boasts of hits and misses in equal number. The Khiladi of Bollywood will be seen in Rowdy Rathore, a Hindi remake of an original Tamil hit, directed by Prabhu Deva, and slotted for a summer release, on 15th June. Akshay will be seen essaying double and contrasting roles, of a police officer and a fraudster, alongside Sonakshi Sinha in a pivotal role. The film sold its television rights for 45 crores- breaking the record earnings made by 2012's early release, Agneepath which grossed a whopping 41crores from the sale of same rights.

Mr. Perfectionist Aamir Khan is next in queue. Reema Kagti's Talaash, a psychological thriller is undoubtedly among the most awaited ventures this year, for more than one reason. Primarily for marking the return of Kareena Kapoor and Rani Mukherji sharing screen space years after their previous mutual project, Mujhse Dosti Karoge; not to mention a chance to see Rani – who has become selective and rare of late - in action after her previous blockbuster No One Killed Jessica over a year ago. This movie has been shot in India and London and is scheduled to release on June 1st.

Aamir Khan fans in addition have his much hyped and promising villainous character to look out for, in the next offering of the superhit Dhoom series, Dhoom 3 which is being filmed as 3-D.

Given his most recent 50-50 record, with Rascals' failure and Singham's super success, actor Ajay Devgn is keen to continue with the action genre. His next, Tezz, an action thriller has received great response since the first theatrical trailers were released at the dawn of this year on January 4th.Tezz casts a entourage of supporting actors- southern star Mohanlal, Booman Irani, Anil Kapoor, Kangana Ranaut, Sameera Reddy, and Zayed Khan. With her cameo item song performance, Mallika Sherawat, after essaying titles of Razia and Jalebi Bai, moves on to join the ranks of Zeenat Aman and Yana Gupta, to become the next Laila of tinsel town. This Priyadarshan directorial will release shortly, on 27th April.

Atop the Khan charts at the moment, Salman Khan, after his long innings in the industry, is finally going to release a movie under the coveted YRF banner. Ek Tha Tiger is a romantic thriller which co-stars ex-girlfriend Katrina Kaif. The shooting has involved many an exotic locales like Dublin, Istanbul, Kazakhstan and Chile and is scheduled for a summer'12 release. Meanwhile, a sequel of the super blockbuster Dabangg is currently in pre-production and if the latest buzz is to be believed, Sonakshai Sinha will be making way for Chamak Challo Kareena Kapoor to share the screen with Macho Khan this time.

Finally, golden boy Hrithik Roshan, after delivering his early 2012 blockbuster Agneepath, garnering all the appreciation for his severe action oriented role, is currently engaged with Kkrish 2, the sequel of the Roshan home production superhero series, directed by Papa Roshan. The wait for this release is however much longer, since by tentative plans the movie shall only hit the floors at Diwali next year, albeit with the added attraction of being in 3-D! While Priyanka Chopra is retained for this sequel, Kangna Ranaut jumps aboard as a superwoman, and Vivek Oberoi as the villain.

Does this newly revived love for action appeal your taste in cinema? Share your views about this altering trend and the shift it has occasioned among filmmakers.