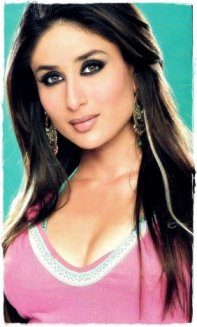 Kareena Kapoor, nicknamed Bebo, just turned a year older on September 21st. The stunning actress is making her grounds stronger in Bollywood with every coming movie.  Initially, Bebo didn't start out too well with 'Refugee' and a few other ventures that crashed at the Box Office but there has been no looking back since then.

Bebo has been part of various movies that did extremely well at the box office like Kabhi Khushi Khabhi Gham and Jab We Met, in which she was appreciated as Geet.

More recently Kareena's Kambakht Ishq had one reason or another to always make it to the news.  Moreover, she's one lucky actress who has worked with very established and successful male actors in the industry like Shah Rukh Khan, Akshay Kumar, Salman Khan, Saif Ali Khan, Anil Kapoor and the list goes on.

Kareena Kapoor is here to stay and with some upcoming happening movies like Stepmom, 3 idiots, Main Aur Mrs. Khanna in her kitty.  The striking actress had nothing to fear as she celebrated her 29th birthday!

We hope you had a fantastic birthday, Kareena!