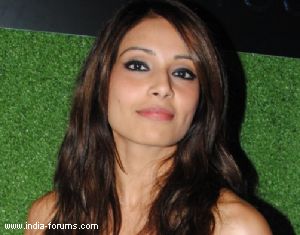 Actress Bipasha Basu, who is back to the Bhatt camp after a decade, reveals that she is scared of her own laughter after working in "Raaz 3".

"In 'Raaz 3', I laugh in a certain way, you must have noticed in the promo. Now when I watch a comedy film, I don't even laugh aloud because I am so scared of my own laughter," the 33-year-old said here at the launch of the first look of "Raaz 3".

"I am a big sissy, I don't look like one but I am. When I was narrated the script of the first 'Raaz', the chair I was sitting on flipped back and I fell down, I was so scared. Even while shooting for 'Raaz' I was the most scared," she added.

Meanwhile, Bipasha is happy to have teamed up again with the Bhatt camp after 2002 hit "Raaz".

"My experience has been great in this film because I have come back. It's the team of my second film. It's very dear to me. It's after 10 years that we all have got together," said Bipasha.

"I just said to Mukeshjee (Mukesh Bhatt) and Bhatt saab (Mahesh Bhaat) that give me a film where I really want to sink my teeth into my character.

"When they narrated this film ('Raaz 3') to me, I loved it but I was really scared about doing it, about projecting it in the best possible manner. But I think I have pretty much done it honestly," she said.

"Raaz 3" also stars Emraan Hashmi and Esha Gupta. It is slated for a Sep 7 release.

‘I’ve Read About My Breakup Before It Happened, About Bedding People I ...