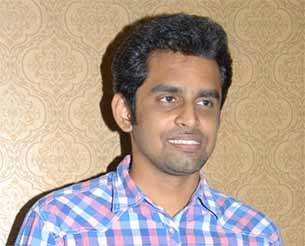 Director Balaji Mohan, who is awaiting the release of Tamil romantic comedy "Vaayi Moodi Pesavum", says bilinguals may help reach a "large audience" but they are extremely "tough" to execute.

"The biggest advantage of a bilingual is that it caters to a large audience. But by the time you finish a scene in a film in a language and breathe a sigh of relief, you realize you have to do it all over again in another language. Therefore, bilinguals are tough to execute," Balaji told IANS.

He says it was not a conscious decision to make a bilingual.

"We never planned to make a bilingual, but we realized that the script was suitable for Tamil as well as Malayalam audiences. Hence, we decided to make it in both the languages. This eventually led to the casting of Dulquer Salman and Nazriya Nazim," he said.

Both the actors have dubbed in their own voices for the Tamil version as well.

"When we decided to make it in Tamil and Malayalam, I found Dulquer to be very suitable for the lead. When I narrated the script, he was very kicked about the project. I like working with actors who want to be part of the project but not because a film is being offered," Balaji said.

"Nazriya came on board because I wanted an actress who could speak both the languages. Contrary to her chirpy and bubbly characters, she plays a new kind of a role, an introvert, and she worked hard to pull it off," he added.

Actress Madhoo returns to the Tamil film industry after over a decade through this film. Balaji cast her because he believes in her capabilities as a performer.

"I was on the lookout for a smart and bold lady. I remembered Madhoo's character from 'Roja', and thought she would be perfect for the role. It's a role with a lot of opportunity for performance and since she's making a comeback, I thought this would be a perfect opportunity," he said.

"I cast her because I believed in her capability as an actress. I also hoped she would be willing to do this role. I'm glad she agreed to do it," he added.

Produced by Varun Manian in association with YNOT Studios, "Vaayi Moodi Pesavum" is getting ready for a summer release.

Both versions of the film will have a simultaneous release.