15th August is a day of pride and honor for all those who live in this liberated country. It is day to celebrate our freedom and pay to tribute to those who became martyrs for us. True to the spirit of freedom & independence, BIG MONEY on Imagine too decided to celebrate this special day in a very unique way. 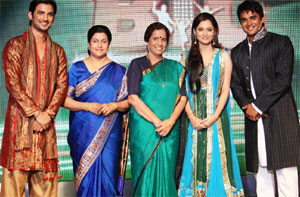 Joining hands in the celebrations with our host Madhavan is one of the most loved bahus of the small screen Ankita Lokhande aka Archana of Pavitra Rishta along with her on screen family Manav ( Sushant Singh Rajput), Savita Prabhune (Archana's on-screen Mother) & Usha Nandkarni (Manav's on-screen Mother). All participants were seen at their lively best overwhelmed with the sense of patriotism.

While Madhavan wore a traditional sherwani, Manav spread the message of "Anekta mein Ekta" through his heart rending speech. The audience also got a chance to witness some truly emotional moments as Savita Tai & Archana reminisced their Independence Day celebrations at school.

On one hand there were emotional moments, while on the other there was lots of hasi, mazzak & taang khichaii amongst the participants. Shedding the garb of their characters in the show, Manav was seen teasing Archana as she grappled with some of the questions, revealing their off-screen relationship. However, reminiscing old memories was not just restricted to I-Day celebrations during childhood. Our host Maddy too became nostalgic as he recollected his younger days' when he had worked with Savita Prabhune in 'Saaya'. Playing their part as responsible citizens of the country, the tele-family decided to donate the whopping prize money they won on the show to the NGO Voice.

Tune in to this special episode of BIG MONEY on Saturday 14th August at 9:00p.m only on Imagine.

toothbrush13 10 years ago I can't wait to watch this! It looks like it's going to be fun.