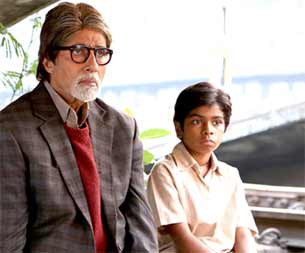 After the screening Thursday, Amitabh, Parth, director Nitesh Tiwari and the producers were felicitated by the president. He was seen complimenting the team. Parth, who looked nervous on stage contrary to his role in "Bhoothnath Returns", also sought Mukherjee's blessings.

"We weren't expecting the president to see it, but he is here," said Amitabh, who wanted the special screening to be organised as he believes the film is "pertinent" to the current situation in India. The country went to polls April 7.

The 71-year-old star, dressed in black ensemble with high-shine buttons, took to the stage before the screening and thanked the President for giving him the opportunity to present the movie.

The sequel to 2008 film "Bhoothnath", "Bhoothnath Returns", released April 11, presents the ghost, played by Amitabh, entering the kingdom of ghosts and how he is mocked at by fellow ghosts for not being able to scare people.

He is later sent back to earth as a ghost. Once he reaches Mumbai's slum area - Dharavi, he meets a child called Akhrot, essayed by Parth Bhalerao. How the child persuades the ghost to contest election forms the rest of the story.

The auditorium was full of excited faces of children accompanied by their parents. The elders also seemed happy to catch the film.

"I don't know what's more exciting - seeing Amitabh Bachchan in person or watching his new film at Rashtrapati Bhavan," said one of the young attendees.

The movie left many moved.

"It is a very good film. I laughed at their jokes and cried during the emotional scenes and it has social message too," said one of the viewers.

The film has been appreciated by critics and moviegoers and has already minted Rs.30.14 crore in India.

Later Big B shared his experience on his official blog srbachchan.tumblr.com.

"The President of India Pranab Mukherjee has just been shown our film 'Bhoothnath Returns' at the Rashtrapati Bhavan, and I am delighted to say he enjoyed it immensely."

"He applauded after the film was over, as did the entire select invitees and said it was such an apt and beautifully constructed film, keeping in mind the current election scenario in the country," he posted.

"What a huge privilege and an honour for the President to have taken time out from his busy schedule to oblige us with his august presence."

"His words of encouragement for the entire cast and crew, and his generosity in presenting us with a special memento goes a long way in the appreciation of the film, and in his own kindness," he added.

Shraddha Kapoor and Sara Ali Khan to be Summoned by NCB in ...
3 hours ago

Director Milap Zaveri on deactivating his Twitter handle; ...
3 hours ago