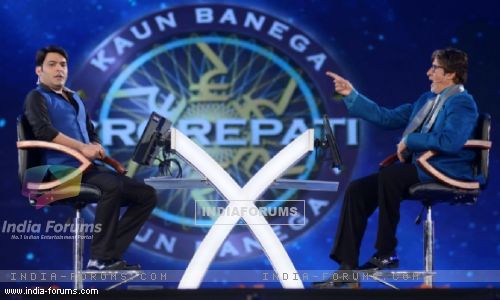 What do you expect when Bollywood megastar Amitabh Bachchan and superstar comedian Kapil Sharma join forces on the stage? Entertainment, entertainment and entertainment!

Their chemistry was crackling! Their barbs were hilarious! And their one liners literally bowled over the audience assembled here for the mega launch of the eighth season of "Kaun Banega Crorepati", to go on air Aug 17.

From taking potshots at each other to trading light-hearted barbs - both of them put their funny sides foremost and cracked up the audience Saturday at the jam-packed Surat International Exhibition and Convention Centre, which has a seating capacity of about 7,000.

The two, now described as the titans of Indian television -- Big B for his over 14-year successful stint with KBC, and Kapil for entertaining with his hit show "Comedy Nights With Kapil" -- were so enthralling that the audience stayed glued to their seats for over five hours.

In fact, high points were aplenty!

"Daal-phulka," pat came Kapil's mom's response and had the people in splits, and she then told Big B that his father had a good sense of humor and he has inherited it from him.

Another funny moment was when Kapil's single status was inquired about and he turned the table by requesting Big B and saying: "Would you please be kind enough to take my proposal to actress Deepika Padukone?"

They complemented each other on the stage and their fans were delighted to see them letting their hair down, especially 71-year-old Bachchan, who was in full form.

From shaking his leg to cracking jokes, Amitabh, known for organizing stage shows abroad during his prime, was admirable in every sense of the word.

Kapil admitted being jittery about teaming up with Amitabh, but praised him for "giving space" and added: "This is my third time with Bachchan saab and whenever I work with him, I feel blessed."

Kapil, who also took the hot seat for a dummy round, said his father was a fan of KBC and he used to watch the game show with him.

The ace comedian got emotional too.

"My mother was sitting in the audience and I got emotional, but then I thought I have come here to entertain people..."

Often seen in his serious avatar, Big B was a treat to watch and Kapil, known for his gift of the gab, heightened the fun with his presence.