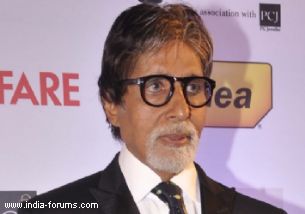 Film writers often decry absence of due credit, but here was megastar Amitabh Bachchan at a conclave here Friday, glorifying their talent for moulding his profound image as an actor with movies like "Zanjeer" and "Kaala Patthar".

The 71-year-old thespian was in the capital for a talk on "Cinema as the mirror of society" at the India Today Conclave 2014, and was asked how he managed to bring the society's pains and pressures so effectively on the screen with his movies.

"The image was more an instigation from the people who wrote films at that time. I would credit the writers of that time... writers like Salim-Javed (Salim Khan and Javed Akhtar). They thought about it. I am merely an actor who happened to get a role in films like that," Amitabh said humbly.

When "Zanjeer" came out in 1973, the corruption levels and low economic growth had cast a pall of gloom on the country and the common man was upset with the system - a predicament which was well-captured with the angst in Amitabh's iconic portrayal as Inspector Vijay Khanna.

"They (the writers felt the anguish, the wrath, discontent and dissatisfaction among the people in the society and embodied it in one man - the angry young man (Inspector Vijay Khanna in 'Zanjeer')," said Big B, adding that he hates such "epithets".

His 1979 film "Kaala Pathhar", also penned by the indomitable Salim-Javed, highlighted the plight of coal miners and was also in sync with reality.

The response, as expected, was met with applause.