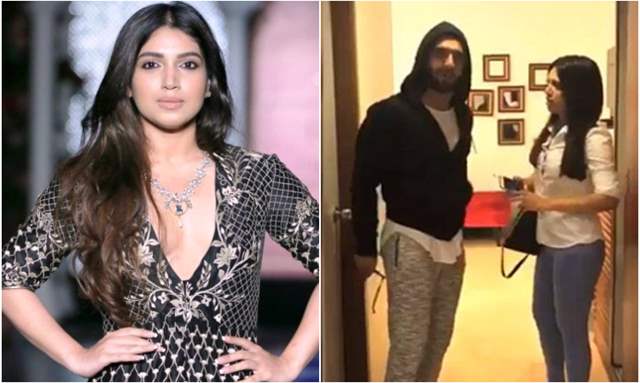 Actress Bhumi Pednekar is one of the best examples who has worked her way to the top. The actress has won accolades right from her debut film Dum Laga Ke Haisha. The actress made her debut after working as an assistant casting director at Yash Raj Films for six years. But do you know, She also auditioned Ranveer for Band Baaja Baaraat when she was a casting director?

Bhumi Pednekar recently appeared on Neha Dhupia’s talk show No Filter Neha season 5 and she was quizzed who of these actors would be great at some other professions than acting. The actress opined her views on Ranveer Singh and she feels that Ranveer Singh could have been a ‘sex upchaar doctor’ (sexologist), if he was not an actor. The actress admits that she was blown away and intimidated by him. “I think he will have some great hacks,” she added.

The Bala actress recalled auditioning Ranveer and said, “I’m actually in the audition, it’s on YouTube.”

“It was great fun yaar, his energy was just amazing, I was blown away. I was so intimidated by him because I was like, my god what a fantastic actor and what energy. From whatever I’ve heard from Shanoo (Casting director at Yash Raj Films) he is as authentic as it gets,” she said.

Speaking of a few more actors, she even suggested that Arjun Kapoor should be a ‘Stand-up comedian’, Ayushmann Khurrana a Cricket Commentator, Hrithik Roshan a Stylist as she feels he’s very slick. She even said Vicky Kaushal and Rajkumar would make a great VO Artist.

Last but not the least, she further named her Pati, Patni Aur Woh co-star Kartik Aryan for the Therapist or agony aunt/ uncle profession because she thinks he’s full of fundas.

Meanwhile, Ranveer is yet to react to Bhumi’s suggestion and we wonder what he might have to say about the same!

On the work front, Ranveer has two projects lined up - ’83 and Jayesbhai Jordaar. On the other hand, Bhumi Pednekar was last seen in Dolly Kitty Aur Woh Chamakte Sitare co-starring Konkona Sen Sharma.