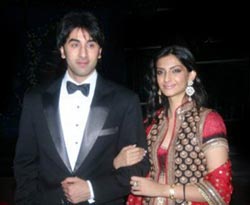 The Sawariya jodi appears to be a badluck for any project that is announced with them. Shimit Amin the Chak De India director was keen to cast the duo, Ranbir and Sonam for his next project with Yash Raj Films and had started with the work on the film. Now it is known that Sonam has opted out.

However, Ranbir’s name was figured in the film from the beginning later on Sonam came into picture. Both the actors approved for the same but, Sonam had second thoughts and she remitted herself.

In past there was a buzz about she being part of ‘Rab Ne Bana Di Jodi’ but things didn’t work in her favor and so after that both Sonam and her dad Anil Kapoor are being watchful.
Before this Sonam was suppose to do  Vicky Singh’s ‘Mera Jahaan’ co-starring Ranbir and Deepika but when she learnt that audience will be more interested in the chemistry between Ranbir and his girlfriend she moved out. According to the director, Sonam opted out because she did not want to do a two-heroine project.
After all this,there was buzz about the differences between these childhood pals, however they had patched up.
19 Likes