Babul Supriyo, the singer who is currently riding a popularity wave on television for his excellent performance as a host in Sony Entertainment Television's musical reality show K for Kishore and for his highly acclaimed singing in NDTV Imagine's Dhoom Macha De has come up with a new album titled 'Untitled'. 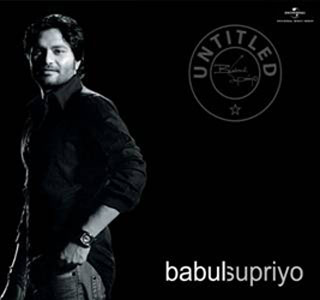 When asked about his album, Babul says, “It’s a compilation of the ten best songs that have happened to me in the last two and a half years. A lot of people have been questioning me about when I would be coming up with a new album, so I thought this was the apt time to bring it out.” But why the name Untitled? Babul quips, “Each number is different from the other. Moreover, every song is very close to my heart. In fact, I can say each song is like my baby and I obviously cannot call all of them with the same name. Therefore, I decided to call it Untitled. However, the surname will be Supriyo. (Laughs)

So does the release of his album mean goodbye to television? “Not at all”, replies Babul, “right now K for Kishore has come to an end and I have been eliminated from Dhoom Macha De. But that doesn’t mean it is an end to my television career. I have a lot of projects in the pipeline but I don’t want to say anything about it right now.”