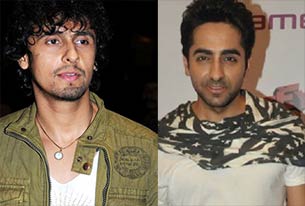 The lead character, Bhade, is essayed by Deven Bhojani who will try his hand at singing in one of the episodes.

"We have approached both Sonu and Ayushmann for a cameo in one of our soon to be telecast episodes. In a hilarious turn of events, Bhade will end up taking the singer's voice while sorting out his problem," producer JD Majethia said in a statement.

"Bh Se Bhade" depicts the life of a common man who is blessed with the knack of taking away the problems of those around him.

The show is also expected to have more cameo appearances in each episode. It also stars Sarita Joshi and Atul Parchure and is aired on Zee TV.