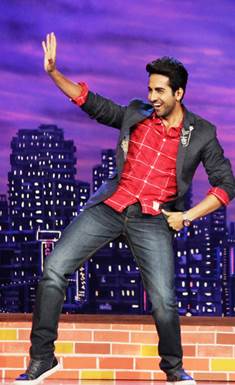 It sure looked like Ayushmann was on top of the world when  'Cine Stars Ki Khoj' - the very show that had shown him the door in 2004 laid down the red carpet for him to make an appearance as a role model and an inspiration to its current crop of contestants. As he shot for the two upcoming episodes of the talent hunt reality show, Ayushmann was at at his flirtatious best with the female contestants. While he mesmerized the judges by singing a song at the very beginning of the episode, he fast became a hot favorite with the ladies with all his antics.

While his cute boy-next-door looks and dimples set many a female heart racing, Ayushmann decided it was time to leave all the ladies weak in the knees ... He flirted with and charmed every female contestant that came on to the stage. From having a chat at length with them to at times talking with them in their mother tongue to serenading them or doing a jig with them, Ayushmann's charm seemed to floor all the girls who came for the auditions.

Talking about his stint with the show, Ayushmann said, "It's a proud moment to be back on the stage from where I was once rejected. I cried the whole night after that rejection, but today I feel, that gave me all the more confidence to surface with better performances and confidence. I'm glad to be present on the show today as a part of the judge's panel sitting alongside Victor Sir and Sonali Ma'am. I'm sure apart from having a gala time, we will end up scouting out immense talent and fresh faces from the show."

amberose 9 years ago Thats y i love SRK...Love You SRK

-Nirvana- 9 years ago LONG LIVE THE MOST HANDSOMEST KING KHAN! :}

Vartika07 9 years ago That's why i love u srk u r d best and always help others. Srk is the best.

..Roopal.. 9 years ago srk is the best example of a living friendship...always present for his friends...both he and salman everytime teach me a lesson of friendship...they are the friends for whom one will love to die...

AfghanLeena 9 years ago SRK is the best love him so match...

..Ananya.. 9 years ago SRK is a complete sweetheart..he is ready to do anything for his friends!!