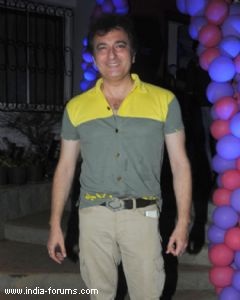 Actor Avinash Wadhavan has been roped in to play a negative role in popular TV show 'Balika Vadhu'.

The actor, last seen on the small screen in TV show 'Junoon - Aisi Nafrat, toh Kaisa Ishq', will enter the show to create a ruckus in the life of Jagya (Shashank Vyas) and Ganga (Sargun Mehta.

Avinash, who also worked in films like 'Geet', 'Junoon' and 'Papi Gudia', is excited to be associated with 'Balika Vadhu'.

"This is the second time I will work with Colors. Earlier, I played Kalishwer in Rajan Shahi's 'Maat Pitaah Ke Charnon Mein Swarg '. This time I will be seen in their flagship show 'Balika Vadhu'. My character in 'Balika Vadhu' is very intense. It has many shades," Avinash said in a statement.

"It is very exciting to be part of a cult show like 'Balika Vadhu' and to be associated with Colors. I am looking forward to work with the cast and hoping that audience will love me in the role too," he added.

Avinash has already started to shoot for the show and his entry can be seen in November 20 episode.

9 years ago Shashank vyas u r doing an amazing job as jagya. We are proud to be a fan of u.u won't let down ur fans however cvs plays with ur role. We are assured if not today on the other episode we will get ur darshan. Keep rocking and all the best.

+ 4
9 years ago he is much better than show stealer. hope shashank vyas gets more space now

9 years ago Shashank Vyas, we will watch anything for you as long as it doesnot involve ansh into it. Please creatives we beg you, please spare us this time without the greats involvement.

9 years ago Hope this trk bring good story for jagan without any involvement of ansh. Created for jagan shld ended only with jagan. Shashank u r doing a fabulous job as jagya. Watching this show only for jagya . Even jagan has to die let them do it for each other plz don't play with the emotions of jagan fans and kill them by inserting anandhi for saving jagan. Still ganga didnt get recognition for her brilliant presence of mind in revealing the real color of sanchi plz spare us.

+ 3
9 years ago Shashank vyas,missing srishank like hell...but watching just for u...Hoping that this will be a good track...All the best...