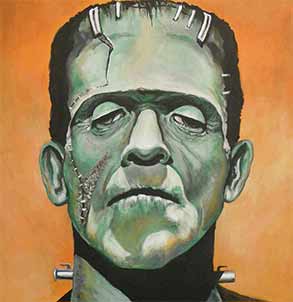 The Indian movie audience is being spoilt for choice to decide which TV or film actor they'd like to hear as Frankenstein's Monster in the dubbed version of Hollywood film "I, Frankenstein".

PVR Pictures, the Indian distributor of the sci-fi action film, starring Aaron Eckhart, has come up with a unique way to engage the audience for the movie's release in the country.

PVR has come up with an online campaign to allow the audience to choose their preferred voice for the epic role of Frankenstein's Monster.

The poll, which will be available Jan 13-15, will have TV actors including the likes of Gaurav Chopra, Karan Singh Grover, Gurmeet Choudhary and Vikrant Massey or the audience could choose one of Bollywood actors including Randeep Hooda, Emraan Hashmi, Gulshan Devaiah and Vidyut Jammwal.

The person with the highest votes will be the one PVR approaches to dub for "I, Frankenstein", which is being co-distributed in India by PictureWorks.

Unconventional, brilliant actors who are underrated and needs some ...