Bollywood filmmakers have time and again been inspired by Hollywood flicks and even best selling novels. But the recent spat between writer Chetan Bhagat and the team of 3 Idiots has led the makers of 'Atithi Tum Kab Jaoge?' to ensuring that no such controversy is created around their film. 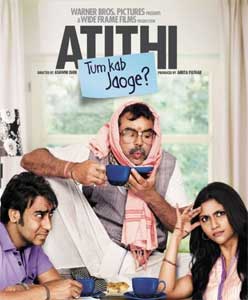 
He confirms, "While penning my film, I had read Sharadji's piece and had therefore, got a letter of consent from Sharadji's daughter since the titles are similar. The position of credit has not been specified in the letter of consent. Though our team is yet to decide on the position of the creditline, I have no problems crediting Sharadji in the beginning. I'm also producing a serial on Sharadji's works titled Lapataganj: Sharad Joshi Ki Kahaniyon Ka Pata. Here, I've included Sharadji's name in the title. Giving due credit to an author adds credibility to my project."


Well, we certainly appreciate this move by the team of 'Atithi….' and hope other filmmakers also follow suit!

Scheduled to release on 26th February 2010, 'Atithi Tum Kab Jaaoge' is a laugh riot produced by Warner Bros. Pictures India and Wide Frame Films starring National Award winners Ajay Devgn, Konkona Sen Sharma & Paresh Rawal and directed by Ashwni Dhir while the music has been composed by Pritam. Amita Pathak (daughter of Kumar Mangat) has taken on the reins of a Producer for the first time with this project.

The film revolves around the story of a middle class couple (Ajay & Konkona) who land up with an unexpected guest (Paresh Rawal) at their home.