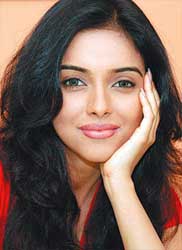 With several Bollywood projects in hand, southern beauty Asin Thottumkal moved to Mumbai from Chennai but says she has no plans to stay in the city permanently.

'This is not a permanent shift from south Indian film industry to Bollywood, it's just that I had tw oexciting projects, so I came here,' Asin, who was adjudged the best newcomer at Nokia Star Screen Awards for her performance in Aamir Khan starrer 'Ghajini', told IANS. The 23-year-old actress, who was also in the Tamil version of 'Ghajini', will be next seen in Vipul Shah's mega budget film 'London Dreams' with Salman Khan and Ajay Devgan.