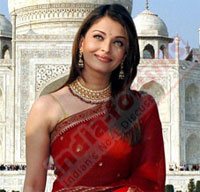 Mumbai, Sep 16 (IANS) Aishwarya Rai worked at a furious pace to complete director Ashutosh Gowariker's historical drama 'Jodha-Akbar' in time for its Eid release. But for all the effort, the film's release has now been re-scheduled for New Year.

Aishwarya spent the last two weeks commuting frantically between Karjat and Mumbai to complete the project.

'Because she has to leave for Boston, there was no way she could postpone it. Aishwarya shot in Karjat every night for the past two weeks to complete her remaining song in 'Jodha-Akbar',' a source close to her told IANS.

'Pink Panther' on schedule, she almost failed to make it, thanks to her outrageously choc-a-block schedule prior to her departure.

'She would rush back to Mumbai early morning, and then dub for the film every day. She was almost delirious with overwork,' added the source.

At the end of it all, Ash's efforts turned into ash because 'Jodha-Akbar' was postponed from an Eid release to New Year.

Incidentally, Aishwarya will be away almost till the end of October.

Meanwhile her hubby Abhishek Bachchan, who's currently shooting an ad in Mumbai, leaves for Namibia in October to shoot for Goldie Behl's 'Drona'.