Mumbai, April 1 (IANS) Aishwarya Rai has declined to co-star with Hollywood wonder-boy Will Smith again. This is the third time she has turned down his offer.

'That's true,' she laughed. 'I had to say no to Will for 'Tonight He Comes'. I feel awful about it, but I've my priorities very straight. Yes, family always comes first,' Aishwarya told IANS. 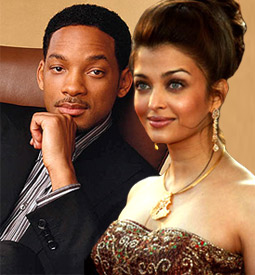 Two years ago the 'Men in Black' star offered Aishwarya the comedy 'Hitch', remade into Hindi with Salman Khan and Govinda as 'Partner'. She couldn't do the film due to time constraints. In quick succession, Aishwarya has turned down two Will Smith projects.

Contrary to reports, Aishwarya, who tied the knot with Abhishek Bachchan last year, didn't decline another Smith's 'The Seven Pounds' to celebrate Karwa Chauth with her husband in Mumbai.

'That's what they wrote in the US press... that I preferred to return to Mumbai to 'starve' myself for a religious occasion than to meet Smith for the film. That's completely incorrect.

'The script reading for 'The Seven Pounds' was just after Diwali when Dadimaa (Teji Bachchan)'s health dipped drastically. So I didn't make that trip out to LA for the reading session with Will. Is that wrong? Not to me. I'd any day put family over career.'

So are Ash and Smith star crossed?

'When it has to happen it will happen. We'd love to work together. There's something very charismatic about that actor. He gives off very nice vibes.

'He's very adventurous as an actor. He does 'I Am Legend' and 'Pursuit Of Happyness' at the same time. He's an actor, rapper, and a great family man. He likes to be adventurous. I like that.'