View Profile
Actor Arjun Rampal gained a good popularity from 'Rock On'. The movie saw rise in his fan following. But did you know apart from being a good actor and a model Arjun is very good father. Yes, Arjun has been titled as the best 'dad' by one magazine. 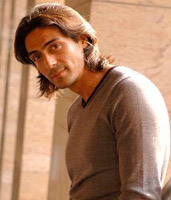 
This magazine conducted a survey where the nominees for best 'dad' were actors
Amitabh Bachchan, Shahrukh Khan, Hrithik Roshan, Akshay Kumar and Arjun Rampal. However, Arjun got it.


Hey this does'nt mean that rest of the actors are not best dad.For the sake of his son actor Akshay Kumar has made a film 'Jumbo while actors Shahrukh Khan and Saif Ali Khan are not an exception. Lets see what Arjun does after earning this title.